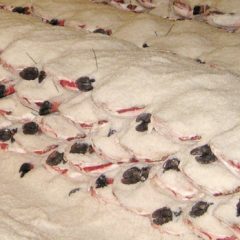 The salting of Ibérico ham: the key of the salt

The salting Ibérico ham process is one the most important steps in the elaboration process. This is a delicate process, which also gives character to the ham. This step is should be done very carefully, always under the control of a ham expert as the ham quality may vary depending on the conservation.  The quality of the ham come from the best pig may be ruined because of being too salty or not salty enough. What is the salting process? The salting is a very old technique. Traditionally, the salt was used to preserve fresh food. In the case of preserving the ham, salt helps to extract, dissolve and return the gravy to the ham by dissemination. By this process, proliferation of microorganisms which may rot the meat becomes harder. So the secret of salting ibérico hams is in the perfect percentage of salt according to ham’s capacity to absorb it. This process is known as osmosis, which consists on the natural capacity of the ham to absorb salt and offload fluids.   How many salt needs each ham? We can’t apply a random amount of salt to hams and shoulders because each piece will absorb the salt quantity needed for it preservation. There is a general rule in which 1 kilo worth 1 salting day, always under ham expert’s supervision as it is not an exact science. Along the process, the ham will be turned in order to absorb the salt uniformly. The salting days depend on the weight of the piece (more days for hams than for shoulders) and the amount of fat, as this an agent which slows down salt infiltration and diffusion. In other words, ibérico bellota hams have more fat than serrano hams, so they need longer salting period for the optimal result.   Futher information about salting The salting technique more used and know is salting in stack. The classic technique is to create columns or stacks of 6-8 hams separated by a 10-15 cm salt layer. At the end, hams are covered with salt homogeneously. For the salting process, we will need specific sort of salt. The salt used should be sea salt (coarse or semi-coarse) additive free in order for the process to be as natural and product-respectful as possible. The salting process is very important to get a good ibérico ham, done in cold-storage rooms at 2 Celsius degrees as average temperature and relative approximate humidity is 90%. Without this process, the ham will lose quality and flavour, as we won’t enjoy the real iberico and serrano ham as we know it... 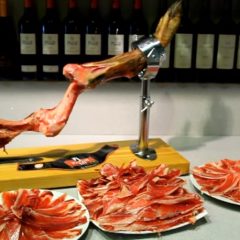 How can we use serrano and ibérico bellota spanish ham bone?

Among gastronomy, cookers and gourmet fooding lovers; it is well known the bone of iberico de bellota and serrano hams is used to make soups, as lentil soup, as well as stews or ham jelly. Want to know more about how to use it? Bone is one of the most valued parts of the ham. However, it is not as used due to lack of knowledge about how to use it. Here we tell you how to use it:   Make soups and stews The cooking of soups and stews using iberico de bellota and serrano ham bones is very famous among professional and amateur cookers. The bone of the ham gives aunique taste to soups and stews, making them more tasty and delicious. Different types of soups and stews are enriched with ham bones, making them more tasty.   Ham jelly Ham jelly is another way to better profit sustance of ham bone, as it is cosidered the most tasty part of ham. As in the soup, we have to leave the bone cooking until the broth becomes jelly. This is the perfect complement to go with soups or another plates with a special touch.   Give the bone to our dog (or pet) If we don’t want to cook the bone neither waste them, what’s better than giving it to our pet to enjoy it? Always carefully, but this is a real delicacy in family to enjoy! The ham bone is one of the biggest unknown at the time to profit ham, so we give you some useful ideas to better profit them. We wish you delicious ham soups this... 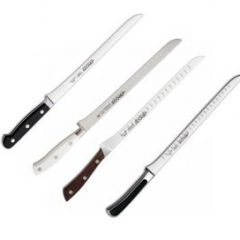 Which types of ham-slicing knifes are?

Did you know that ham knifes have a fundamental role on its quality? There is nothing better for Christmas than a good Iberian ham. This may not sound Greek to you but, did you know how to use them properly? Let me make a brief introduction for you: traditional ham-slicing knife, ham-slicing knife with alveolus, cooking knife and knife-grinder as an accessory. If you want to become an expert ham cutter but do not know how to start, we’ll give you some tips for you not to lose when you start your piece. It is important not to put the cart before the horse and know how to properly use each knife. Continue reading, we are guiding you.   Kinds of ham-slicing knifes   Firstly, there is the traditional slicing knife, i.e. the all times slicing knife. To get a high quality slicing knife and not to waist our money, the blade should be long and flexible, as made with stainless steel. This is important to make a nice and fine cutting in order to profit the ham as much as possible and enjoying its flavour and aroma.   Secondly, we have the slicing knife with alveolus. In sort, it is like a traditional slicing knife with little “holes” to separate the slices better. If you normally slice hams or it is your job, this knife is perfect for you.   Thirdly, there is the cook knife. This knife is quite different by their characteristics and the use given. Unlike the previous two, the blade is rigid and wide to well remove the bark.     Ham-slicing knifes accesories   As a complement, we can also count on a knife-grinder to hone our knives before using them. It is important to have all our knives in perfect conditions to cut the ham the best possible slice and enjoy it. If you don’t know which knife to choose we recommend you to try the natura slicing knife from... 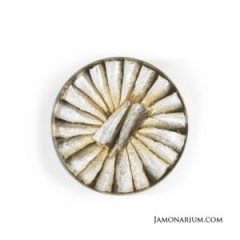 Sardines and anchovies are very appreciated in and outside Spain. I propose to get into the history of Sardinophilie or Sardines . Sometimes, sardines are used in idioms with not good fame . We use it as a comparison when we talk public transport or when it does need describe the little space available on the beaches of the Mediterranean seashore. There is a well-known idiom in spanish which says: “I felt like a canned sardine“.   Sardines production from its beginning To get the most positive side of the canned sardines, will explain more about this invention and its benefits. The production of canned sardines dates back to the year 1810 which has been possible thanks to Napoleon’s initiative. It was not him who had that idea, but he was the promoter of this invention as a good resolution to preserve ingredients during long time periods. By that time there was nothing to open lid, so it was simply opended with a bayonet.   By the end of the 19th century, Brittany was leading the canned sardines international market and France even had the monopoly of canned products, but Spain and Portugal followed its example and ousted them. Looking at the actual canned sardines, they have nothing to do with the ones long ago: it was the poor’s food or for lower social classes.   Sardines nowadays Since some time ago, some canned fishes are considered a delicacy (at least high quality canned sardines and anchovies) and nowhere like Spain to appreciate it. In Galicia, the capture begins in June when sardines are at their maturity and firmness point preserving the fish flavour a bit sour. The fishes are carefully handly selected and scaled.   It is important not to forget sardines are very healthy, so they have a low n-3 fatty acids. Once the can opened, the sardines can be served from the can or with bread with butter or fresh tomatoes.   Now, there are good news for sardines lovers and defenders. Scientists at the American Fisheries Institute of the Ocean and Atmospheric Administration have observed sardines in oceans over the years. They examined catching conditions in trawl nets and calculated being based on the quantities of fish eggs found there. The result of these investigations comes up with an amazing conclusion: “The natural sardines development is not longer in danger. On the contrary, the amount of these fish tends to increase”   Conclusion about sardines study They confirmed that the population of predatory fish, such as cods and tunas, was reducted over the past 100 years and declined by approximately two-thirds. The total amount of “forage fishes”, such...

The best iberico ham for the MWC 2018 in Barcelona, the real “Pata negra”.

From Monday February 26th to Thursday March the 1st the GSMA Mobile World Congress 2018 takes place in Barcelona, as every year. This is currently considered th   So, what about enjoying a superb tasting of gourmet and ham during your stay in Barcelona? Come to our shop in Barcelona, placed in Passeig de Sant Joan 181 and treat yourself. We are Spanish ham and gourmet fooding specialists, with 30 years longer experience and a huge range of gourmet products you will love. We distribute high quality products all over Europe which you can shop via our site www.jamonarium.com   What about a fast and calm dinner in the hotel? If you want a comfortable and calm dinner in the hotel during the congress, don’t hesitate to contact us. You can visit us at our store Jamonarium/Pernil 181 or inform your hotel reception and we will do the rest. In 2 hours you will receive the dinner ready at the hotel, so you will only have to enjoy our best sausages and ham with some excellent wines. e most important mobile telephony congress in the world, bringing together the most important professionals of this field. If you prefer so, you can also visit our e-commerce site (www.jamonarium.com). If you are in Barcelona due to the Mobile World Congress, contact us and we will send the dinner to your hotel. Do you want a comfortable and calm dinner in your hotel? Count on our services!   Do you want to buy a good ham? If you want to give ham and gourmet products as a present, visit us. We will advice your best present. Can’t carry it with you in your return journey? Don’t worry, we send it anywhere in Europe. Are you in a hurry to receive it? We have express shipping service with 24-48 hours transits. If you live outside Europe, we can prepare a discreet pack to carry it in your luggage. Contact us. Visit us in Passeig de Sant Joan 181 (Barcelona), in Gracia’s neighbourhood and 10 minutes walking from Sagrada Familia. See you there!... 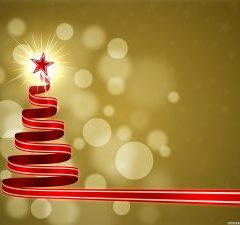 Happy new year, with your beloved ones!

Jamonarium’s team wants to wish you a happy new year year 2018 and we want you to end this year 2017 as worthy: with a good spanish ham and a good wine. We would like to see you around during the next year, we will be very happy to keep helping you and bring you closer a bit of Spain, wherever you are in Europe. Just like that, we wish you a very happy new year!