How to cut the Spanish ham 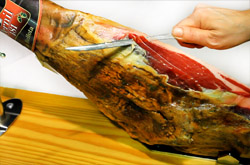 How to cut the Spanish Pata Negra ham?
To make a good cut of a iberico pata negra ham at home you shold follow some easy steps. First, prepare the tools for this task. The «Jamonero» a ham holder, a short rigid knife and a long flexible knife. All knives must be sharppened, it’s very important.
First put the ham in a ham holder, «jamonero». Be sure you have a solid ham holder or the ham is going to keep on balancing while you cut. Cut the top skin and the fat covering the ham. Then slice the ham with a «jamonero» knife, try to do it as flat as you can, to keep the slice as big as you can. Keep on cutting until you get to the bone. Then turn it upside down and do the same procedure on the other side. The pieces of ham with rest near the bone are very tasty, pull them out with the short knife and eat them as «tapas». Enjoy your meal!!! Buen provecho !!!

How to cut Iberian Ham