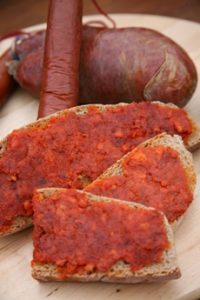 Sausages are delicious, right? In sandwich, with some bread, some others with anything else… but today we are going to talk about a different sausage. I give you some clues:

It’s what you’re thinking, today we will be dealing with sobrassada. It is also known as «Mallorquina» due to its place of origin: Majorca.

This Balearic delicacy is protected under «geographical indication» title, which means the product has a very particular origin and its reputation is due to the place of origin. In other words, the sobrassada is «100% balearic» and its prestige is given thanks to Majorca’s population.

Curiously, the sobrassada has its origin in the need of preserving food during long time periods using the salt technique. It is thought it has a southern italian origin, or at least the word’s etymology shows so. The word “sobrassada” cames from the word sopressata which means «minced», to make sausages. Thanks to the existing foreign trade in the 16th century, the production technique was extended to the Iberian Peninsula, then arrived to Valencia and afterwards, to Balearic Islands. There, it had been very expanded and got its current fame.

Even if we only talk about its meat, we have to bear in mind it is spiced with paprika, pilgrim, oregano and thyme. If you are a porc meat and spices lover, this delicacy is done for you. Sobrassadas can also be classified according its presentation. It may be in sausage, in a thick piece of gut, with a semi-spherical shape… and many more. Different strokes for different folks.

To taste a good sobrassada, you don’t need to travel to Majorca. We suggest you try this ecological sobrassada from black pig. Impossible to try more pure Sobrassada!