Sardines and anchovies are very appreciated in and outside Spain. I propose to get into the history of Sardinophilie or Sardines .

Sometimes, sardines are used in idioms with not good fame . We use it as a comparison when we talk public transport or when it does need describe the little space available on the beaches of the Mediterranean seashore. There is a well-known idiom in spanish which says: «I felt like a canned sardine«.

Sardines production from its beginning

To get the most positive side of the canned sardines, will explain more about this invention and its benefits. The production of canned sardines dates back to the year 1810 which has been possible thanks to Napoleon’s initiative. It was not him who had that idea, but he was the promoter of this invention as a good resolution to preserve ingredients during long time periods. By that time there was nothing to open lid, so it was simply opended with a bayonet. 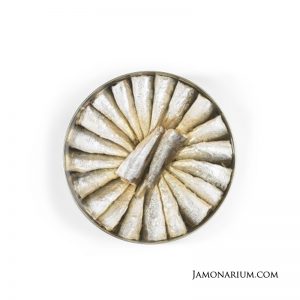 By the end of the 19th century, Brittany was leading the canned sardines international market and France even had the monopoly of canned products, but Spain and Portugal followed its example and ousted them. Looking at the actual canned sardines, they have nothing to do with the ones long ago: it was the poor’s food or for lower social classes.

Since some time ago, some canned fishes are considered a delicacy (at least high quality canned sardines and anchovies) and nowhere like Spain to appreciate it. In Galicia, the capture begins in June when sardines are at their maturity and firmness point preserving the fish flavour a bit sour. The fishes are carefully handly selected and scaled.

It is important not to forget sardines are very healthy, so they have a low n-3 fatty acids. Once the can opened, the sardines can be served from the can or with bread with butter or fresh tomatoes.

Now, there are good news for sardines lovers and defenders. Scientists at the American Fisheries Institute of the Ocean and Atmospheric Administration have observed sardines in oceans over the years. They examined catching conditions in trawl nets and calculated being based on the quantities of fish eggs found there. The result of these investigations comes up with an amazing conclusion: «The natural sardines development is not longer in danger. On the contrary, the amount of these fish tends to increase» 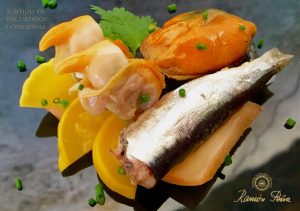 They confirmed that the population of predatory fish, such as cods and tunas, was reducted over the past 100 years and declined by approximately two-thirds. The total amount of «forage fishes», such as sardines and anchovies has been doubled in the last century. Those fishes are normally the food for the largest part of the sea devourers. «By eliminating the most dangerous ones, they are creating a favorable situation for those who were their prey.»

The decline of large predators is also associated with the increase of the global fishing capacity. From 1950 to 2010, this has increased by 54% without major changes in the recent years. Extensive fishing in our oceans hasa similar effect to «When the cat is out, the mice dance.» In other words, the removal of large species and predators of the ocean makes small fishes can develop better.

So the scientists, who have carried out the most complete analysis ever done about fish population in the world’s oceans and how they have changed over the last century, said: «It is advisable to reduce the consumption of tuna and cod, and fill the dishes with sardines and anchovies if we want to contribute to save endangered species and embalance our ecosystem.»

If you want to find anchovies in offer, here you have somes among to choose.