Spain, a food country. 15 dishes of Spanish cuisine you have to try 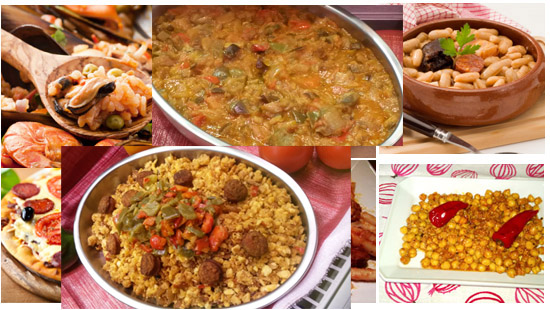 A very simple and typical of all Spanish territory. It is said that comes from Navarra, but the truth is that it can not be attributed to a particular place and you can enjoy it anywhere. With or without onion is its main variant, and convenient to enjoy at any time of day. 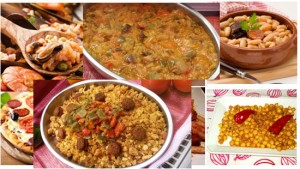 Another easy and essential, that cold tomato soup that many tourist people hate, but many others lose the sense especially on hot days. Tomatoes, cucumber, onion, olive oil, garlic and bread, they are the main ingredients. There are up lately who adds pepper and watermelon as variant.

Since its inception, thousands have been its variations. Depending on the region, with snails are cooked up. And within each region, each has his methods, but there is always an ingredient that never fails in the paella, rice. Mixed, vegetables, meat or seafood paella, there for all tastes and colors.

The migas has as main ingredient bread. It consists of slicing the bread and let soak for a while, some people leave it a day, with a little salt. After fry with oil and garlic, stirring to prevent sticking to the pan. It is usually eaten accompanied by roasted sausage, grilled sardines, fried peppers and melons. The important thing for this dish is it a good bread crust and dense white crumb. Nothing to do with the bread consumed nowadays, which is frozen and baked.

It is a traditional dish from Galicia and basic in its cuisine, made with whole boiled octopus (usually copper pots), a dish common to celebrate. In some towns it is assigned one Sunday each month for ‘Pulperas’ (women who cook this dish), especially in the province of Orense, and they cook it on the street for people who want to taste it.

A more filling dish, it can be considered as meat soup pot. Original escudella includes three kinds of meat: pork, beef and chicken, cooked in a broth of vegetables. It is especially characterized by using in the boiled a large elongated meatball that once cooked it is cut into slices to distribute, made with minced meat mixed with bacon, egg batter, bread crumbs, garlic and parsley, and that it passed by flour and it is fried a bit before being cooked in the water that gives the broth.

The traditional dish for excellence in Austurias, whose main ingredients are the beans, sausages like chorizo and morcilla from Asturias, and pork. It is a well known dish and spread over the entire peninsula. It is a winter dish with a large volume caloric and fat; It is served hot at lunchtime.

It is one of the typical Castilian roasts, mixing crispy and toasted texture of the skin with a juicy meat. It was listed by the Castilla and Leon in 2002 under the category of Brand Guarantee. The unique features of this food that set it apart from the rest are feeding mothers, their weight, which ranges between 4.5 kg and 6.5 kg, and age, which should not exceed three weeks.

Potatoes a la riojana are stewed potatoes with sausage and tomato sauce, onion, garlic and pepper. It is made primarily with potatoes, cook sausage, red peppers, paprika and bay leaf. A curious fact for its good elaboration is that the potatoes must crack to loosen the starch and so as to the sauce will be more forceful.

It is a stew whose main ingredient is chickpeas and also various vegetables, meat and pork bacon with some sausage. Its origin is humble and was initially consumed by lower classes, gradually reaching the high society due to its inclusion on the menus of restaurants. With nearly 3 hours of preparation, the result is a surprisingly very tasty stew.

A delicious lamb stew slowly cooked and full of flavor and tradition, ideal for family celebrations. It used to be a regular dish for shepherds and today has become one of the most important recipes in Extremadura gastronomy. For its preparation it is advisable to use a not too young animal, because having grease the dish will be tastier and better consistency.

Fundamentally Castilian garlic soup contains mainly garlic, water, bread, paprika, bay leaf, garlic and olive oil and poached egg. Soup of humble origin and had multiple variants depending on the economy of the family and the tastes of the cooker. In many places of Spain is common to have breakfast with coffee and this soup and also a few hours later to keep the forces. Garlic soup were taken, usually with one or two eggs inside, which are cooked with the heat of the soup.

It is a nice sailor based stew. This dish owes its name to the word of the pot, which was the vessel in which the marmitako originally was prepared on board in fishing boats. Its main ingredients are tuna(bonito), potatoes and choricero pepper.

As dish in restaurants or tapa, ajoarriero cod is one of the dishes that pigeonhole the Navarran cuisine. Its secret lies in a good cod, a homemade tomato cooked slowly and earthenware dish, essential. A combination of ingredients that enhance flavor and add color to the plate: tomato, garlic, onion, red and green pepper, potato and chilli. A complete round plate, and satisfies the most discerning palates. Usually it left one day resting, as they say is tastier.