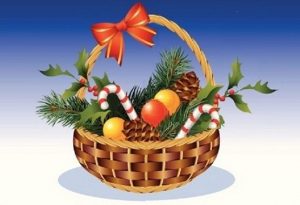 There are customs that we preserve, convinced that they are typical for our land and Spanish culture. A strong tradition at this time is that of giving away customers, employees or friends a basket full of food and drinks. It is the famous and expected «Christmas Hamper». But it is worth emphasizing, that the tradition of giving a basket with food was already known in Roman times. They called it sportula, because it came in a basket of esparto or wicker. Over time the name of sportula became the synonym of gift or reward.

In December there was a very important sportula, which coincided with Saturnalia, in honour of the god Saturn. It was celebrated with sacrifices and a public banquet. This festival was very appreciated by the people and lasted several days, until December 25th. During these festivals, houses are decorated with plants and lit candles. The gifts among friends and family were made, exchanging the sportulas with olive, laurel, dried figs and other foods. It was the end of the dark period of the year and the beginning of the period of light; the birth of Sol Invictus, coinciding with the winter solstice and the beginning of the longest days.

These celebrations lied at the core of Roman civilisation, that the Christian hierarchy had great problems to end its performance. There was no other remedy but to substitute the birth of the Roman god Sol Invictus for the birth of Jesus of Nazareth. Some of the previous customs have been adapted to the Christian festivity that today is known as Christmas Day. 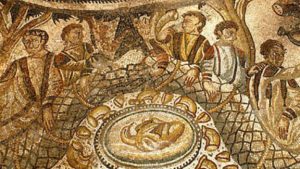 Christmas is, therefore, assimilation on the part of the church of pagan customs, granting to the figure of Jesus Christ the same symbolic character of rebirth as to the Sun. These festivals where the sun reborn, encourage us to offer gifts to maintain and strengthen the ties we have created.

Giving away a basket with good foods is a more ancient than we might think. It has changed from reflecting the good relations between the well off and the plebs in ancient Rome to be adopted in today’s life. We hope that this beautiful custom continues to grow. We all know that generosity is worth it.

If you also think, it is a good idea to give a Christmas Basket as a present, here are our proposals.