There is no more typical-Christmas food than nougat. Nutty, chocolate, classic… and more. Each time, the nougat is more consumed throughout the year (like ice cream), it has always been a Christmas-food reference and its different festivities.

As many things, It is believed nougat has Arab origin and that arose around the 11th century. But, have you ever wondered why we consumed it in Christmas and when this started? Its components could be consumed throughout the year. Instead, nougat only appears at Christmas. Why? Continue reading for further information.

There are several theories why nougats are consumed (or used to be consumed) especially at Christmas. Firstly, ingredients used to make it were very expensive, so it was reserved to be consumed only on special occasions. Although at first the nougat was a food only for those rich, it ended up becoming a Christmas delicacy. 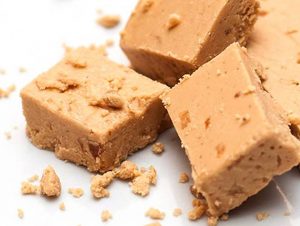 Secondly, it is thought farmers had no work during the months before Christmas, so they had to make a living in some way. Matching up off-season for the farmers happened just before the beginning of the winter, they became temporary nougat-makers.

Although the origin of the nougat dates back in the 11th century, in our country acquired fame and popularity during the 15th century thanks to the strengthening of almond cultivation and the development of beekeeping. It happened thanks to the climate in the Iberian Peninsula, which favoured the two factors to occur at the same time.

Now you know more about Christmas’ star, we encourage you to try our best nougats. If you can’t resist this Christmas delicacy, we recommend you try our most classic nougat of Jijona.